I loved this book. First off, the characters are just wonderful. Except maybe Sam, I didn't like her but I suppose my dislike for her still means she was well done. Poppy and her family and friends were lovely and each featured character felt unique and real. Rosalyn was tougher to connect with - being that she's a good guy and a bad guy all at once for much of the book. Being, myself, a person who often comes across as unlikable, I felt a bit more for her than maybe some other readers. But one thing is undeniable, Poppy and Rosalyn have some kick-ass chemistry.

This romance had just about everything for me and the author's voice, writing style, and sense of humor will keep me coming back for more.

I definitely recommend this book to any lover of romance novels. Not nearly as scary as when I read it as a teen but I didn't expect it to be. Still a great, great read. The author's voice was nearly perfect for the narration. If you like horror books - and this one is quite graphic - you'll probably like this. I was pretty disappointed with this book. I think it started out pretty well, I liked the characters, the chemistry was heating up a bit, the central couple were working toward coming together in a fairly believable way, and I was thinking this would be a good, light romance. Exactly what I was hoping for.

But about halfway through, everything fell apart for me. The "avoid the romance with this woman at all costs" thing was forgotten in literally a second and from then on out it was a trail of deception that, to me made absolutely no sense and seemed to go against character for both of the leads. That went on until nearly the very end when, without really explaining how things were resolved, everyone lives happily ever after.

I think this will be my last attempt at a new Vali book. Pretty interesting and definitely holding my attention. One character - a Fox-like news anchor - makes me want to scream and hit things. It's pretty much the same reaction I have if I accidentally hear Bill O'Reilly or Rush Limbaugh speak. Unfortunately, this guy is getting more page-time than I'd like. I'd like none. I think this is my favorite Cari Hunter book. I may say that after each book of hers that I read but it doesn't make the statement less true. I enjoyed the case, the characters, and the relationship. I liked it all. Combine that with the author's fantastic writing skills and the superb editing and proofreading and it's a winner!

I received a copy of the book from the publisher via NetGalley.

Using text to speech on the Kindle iOS app to read at the moment. Corrected "chicken coop" to "chicken cooperative." Had to pause the book so I could laugh and make this note.

Could have been my favorite I had high hopes for this book. It started out with an interesting case, the team was working together again, there was some inter-departmental politics going on, and Tracy and Dan were moving forward with their relationship but it wasn't a major focal point of the book.

Then at about 80% through, things stopped working for me and it ended up being a frustrating read with a disappointing reveal. I ended up rereading sections hoping I missed something but I hadn't. There was a lot of potential for this to be the best book in the series but it didn't end up that way. Not for me, anyway.

I received a copy of the book from the publisher, via NetGalley, in exchange for an honest review. I saw the movie that was based on this book many years ago and didn't remember anything about it except that I liked it a lot. After I was a few chapters into the audio book, I started re-watching it and realized how different it was from the novel. I didn't finish my re-watch but I did just finish the book so I can't really comment on the differences but, wow, what a good book.

There are some intense moments and a few bits that made me tear up - either with sadness or joy or relief. I'm happy I had the opportunity to listen to this book. I think parts of it will stay with me for a good long time.

I gave it 4.5 but rounded down on Goodreads because some of the flashback portions were difficult to figure out where they fell on the timeline. Ultimately I found this book to be very disappointing. I can't go into any specifics because they would give away the bad guy. Suffice it to say that there was no complexity to the plot or characters. Everything just sort of fell into place and - Dang it! I can't write what I was going to because it would give too much away.

If you're looking for a quick, easy read where you don't have to do any thinking or deduction, you may enjoy this one. It mostly made me want to shake most of the main characters and yell at them.

I received this book from the publisher through NetGalley.

Hoping that the person I wondered about back at 25% is just a red herring because otherwise, this has been just too easy. Gotta be a red herring. Gotta be.

Interesting subject. Terrorism using the internet and family issues mixed in. Definitely not a perfect story but holding my attention. 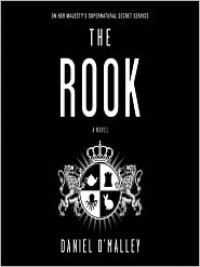 I had no idea what to expect when I started this book. A friend read it, didn't tell me anything about it, and I didn't read the blurb before I dove in. I didn't even look very closely at the cover, which would have given me some clues. I did later see that someone had compared it to X-Men meets X-Files and that seems about right.

I was hooked from beginning to end and am a little sad to say goodbye to some of the characters. I've heard the second book in the series isn't like the first - still good, but pretty different - and I don't think I'm ready to tackle that one just yet.

One thing I didn't expect was to laugh as much as I did. What a great story and a great main character. I certainly recommend this one to anyone who enjoys political intrigue and science fiction.

Oh, and the narrator did a great job on the many different voices. Her inflections during narration, though, kept pulling me out of the story. Not too badly but enough to think repeatedly, "please change that!" I understand that she doesn't do the second book so I'll be interested to know how I like the new narrator once I get around to it.

Well if the rest of the book is as good as the first few sentences, I'll really like it. I didn't read the blurb so I have no idea what this is about. I'm reading purely on the recommendation of a friend. I thought I read this book in my teens but the farther I got into it, the more certain I became that I hadn't. I would have remembered how well done Jack's descent into madness was. For me, that was the best part of the book. I did enjoy Danny's parts of the book, and Wendy's to a lesser extent, but the star of the show was Jack's changes and his growing connection to the hotel.

I think my biggest shock was just how different Kubrick's film is to the novel. I need to watch the movie again since I don't remember a lot of the details. That and the insane number of times the N-word was used. I wasn't expecting it and it really put me off.

I listened to the audio book and initially Campbell Scott's calm tone made me wonder if I wouldn't fall asleep while reading. Luckily, he got down to business when the dialogue and more intense narration called for it. He did a really good job.

I don't know if it was just the audio book and there were clearer demarcations in the physical book, but I was throw off regularly which POV switches. There were a few times when I had to rewind to see if I either missed something or to figure out who was sharing info.

I'm glad I read this one. It won't end up on my all-time favorite Stephen King list but I enjoyed the story.

PREVIOUS NEXT
1321 BOOKS
Google Plus Goodreads